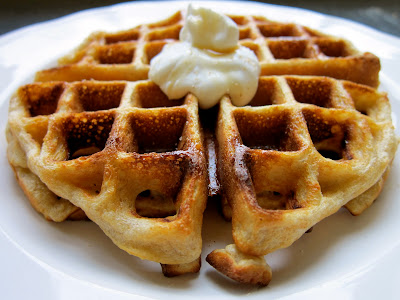 Hello... (tap, tap)...  anybody there? You probably weren't expecting to hear from me after MONTHS of radio silence, and for that I apologize. I've missed NudeFood tremendously but can offer a few humble excuses. In May of 2011, knowing that we wanted to start a family, Tristan and I took the plunge and tied the knot. A few months later I became pregnant, and in September we left our beloved Capitol Hill apartment and bought a house in Queen Anne. A new job came my way in February because, you know, when it rains.  But the biggest, most significant change of all happened a mere 9 weeks ago. We welcomed our son, Maximo, to the world... and we are totally smitten.

While my hands are rather full at the moment, I do hope to make a semi-frequent online appearance from here on out. 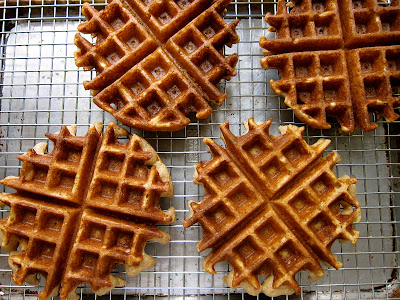 So without further ado, let's talk waffles. In my pre-pregnancy days, waffles weren't something I would typically order unless they had a piece of salty fried chicken on top. But all that changed around month six. If waffles were on the menu, that's what I was gettin'. However, I came to the sober realization that good waffles were hard to come by.  Either they were too soft, too thin, not toasty enough, too sweet or just too blah. I wanted a thick, crispy-on-the-outside-eggy-on-the-inside waffle with great flavor. Looked like I'd have to take matters into my own hands. 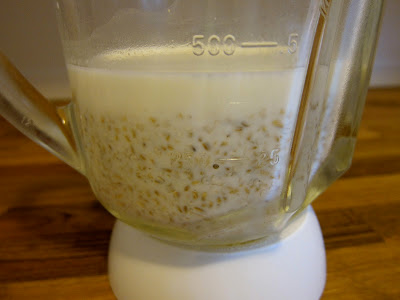 This method has so many things going for it. It starts with whole grains that get soaked overnight, and we all remember the magical benefits of soaking grains. Besides oats, buckwheat groats are added for a delicious layer of nuttiness. And instead of mixing in whole eggs, some of the whites are whipped separately and folded into the batter to produce exceptionally thick, fluffy waffles. 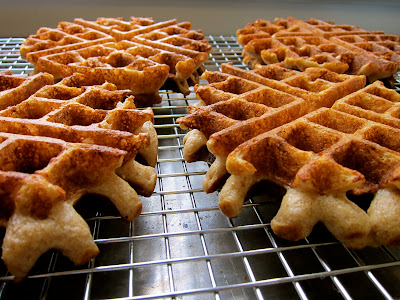 Warning: If you're looking for generic Eggo-type waffles, you'll be disappointed. But if you're in the market for a delicious and nutritious spin on an old classic, keep reading... 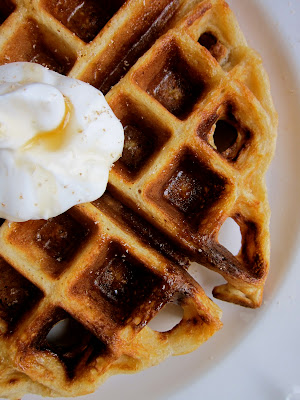 Overnight Buttermilk Buckwheat Waffles
I like to make extra waffles to freeze for a quick breakfast anytime. Just pop one in the toaster*, spread with peanut butter and top with banana slices.

Place steel cut oats, buckwheat groats and buttermilk into a blender, cover and refrigerate for 8 hours or overnight. In the morning, whiz the mixture until blended. Add the melted butter, salt, sugar to taste, baking soda, 1 whole egg, 2 egg yolks and vanilla. Blend until well mixed; pour batter into a mixing bowl. In a separate bowl, whip the remaining two egg whites until stiff peaks form. Using a rubber spatula, carefully fold the egg whites into the batter.

Cook waffles according to waffle maker instructions. For my Belgian iron, this meant brushing lightly with oil, ladling 3/4 cup batter onto the iron and cooking for about 3 minutes. Keep cooked waffles warm in a 200 degree oven until ready to eat.

*If you plan on toasting frozen waffles, under-cook them just slightly in the waffle maker. They will brown a bit more in the toaster.

**If you don't have buttermilk, simply add 2 teaspoons of lemon juice or vinegar (white or apple cider) into the milk and allow to sit for 5 minutes. The mixture will thicken.
Posted by NudeFood at 3:04 PM

Congratulations to you and your husband!! Whenever youre comfortable with it you know all of us who follow you would all love to see little maximo :)
CHEERS!

Oh! Hope you do continue! Just found your wonderful blog and have really enjoyed it so much. You are a born writer. I've included it among my Favorites to check from time-to-time. And Congratulations on the birth of your son!